Somewhere in the middle of the nineteenth century, Thomas Burry met and married Christina Sheirlaw in their home country of Scotland. Thomas provided for his wife as a journeyman mason. In 1872, the young couple, still in their 20’s, decided that they would take their growing brood and start fresh in the beautiful land of rain and ice; Toronto, Ontario. On their way to their destination, Christina gave birth to George (a person of particular interest to us) in Newark, New Jersey. The years rolled on and everything froze, as all things do in Canada, yet Thomas and Christina established themselves and finally ceased their attempts at overpopulating the world when they had acquired seven children.

On October 12, 1899, the 27 year old George Burry married 23 year old Emma Ada Kilby in Toronto, Ontario. We know little of this couple. He was a “confectioner” by trade (according to their Marriage Certificate) and she had a charming accent from her childhood in England.

We know for certain that over the years, in addition to George, two of his brothers had established themselves in the confectionery industry, in some capacity.  Edward James Burry was President of W.C. Burry Bakers Co. in Pittsburg at the time of his death(1935) and Albert Andrew Burry (who we’ll return to briefly) was, at the very least, in a management position at Bingham’s Soda Fountain and Candy Department at 146 Yonge St. Toronto, Ontario.

As I have dug through the halting tidbits and hidden morsels of information on this important branch of The Fudge Shoppes history, I find it passing strange that at least 3 of this Scottish stonecutters offspring found their professional calling in the sweets and pastries industry. Perhaps, it was just the golden era for confectioners. Perhaps, it was something in their veins.

At the turn of the century, Emma and George celebrated the birth of their first son George Jr. and five years later, the birth of Allen Ralph Burry.

A note to the reader: Allen Ralph is the father of Thomas Allen Burry, who many of you had the pleasure of knowing as “Allen” who, along with his wife Anna, founded The Fudge Shoppe. In an attempt to restrict confusion as much as possible, I’ll refer to Allen Ralph as “Allen Ralph”(how clever I am). Although this is damnably tedious, I love thee, oh reader, and so, doth love the sacrifice. Let us continue.

Fortunately for us, the youthful Allen Ralph had a keen interest in photography. His photo album gives us a glimpse into a simple life of open smiles from friends, family gatherings, fishing trips and journey’s to far away places. The presence of odd angles, dramatic poses and faded landscapes force one to believe either that young Mr. Burry was ahead of his time or that youthful photography hasn’t changed much at all over the last hundred years. Allen Ralph found employment in Barkers Bakery while George Jr. worked a stint with his uncle, Albert, at Bingham’s. According to Allen Ralph, it was while working at Bingham’s that George befriended a co-worker by the name of “Charlie Sees" and in 1921, “Charlie” and George both left Toronto, in order to form their own candy empires. “Charlie” went to California and George to his mother's homeland of England.

We’ll leave “Charlie” here.  I can’t substantiate that our George Jr.’s friend was Charles Sees of Sees Chocolates, and all we have are the words of Allen Ralph, who passed away in 1994. I will say that, for me, it is completely believable that George and the great Mr. Sees could have known each other, given that, in the candy industry of the 20th century, everyone seemed to have known everyone else. Over the Thanksgiving and Christmas dinners of my childhood, it was not uncommon to hear the names of great men and women, from all over the continent, who had overseen the founding of candy and chocolate empires, bandied about as if they were our next door neighbors.

In London, George Jr. opened a small shop that he named Polly-Anna, and in the 1920’s it was maybe not so surprising to find “wholesome sweets for children," written all in bold, capital letters below his window. Unfortunately for George Jr. (and fortunately for us), the early 1930’s were particularly difficult for those in the candy industry. A massive sugar shortage due to strikes and riots abroad only aggravated the situation brought about by the Great Depression, and Polly-Anna’s closed its doors around 1935. But George Jr. was already planning his next confectionary venture in the birthplace of his father, New Jersey. Burry’s Cookies would be founded the next year and before his brand had time to establish itself as the producer of such staples as The Scooter Pie, along with the Guacho, Fudge Town and Mr. Chips cookies, he acquired a small bankrupt fudge company in Plainfield, named after its owner, "Helen Elliott". While George Jr. had been abroad, Allen Ralph had married Clarice Kathleen Higley in 1930, the daughter of Thomas and Elizabeth (Labadie) Higley. It must be said that Clarice was a rather severe character and indeed a terrifying one to your narrator. Those who recall her as a grandmother remember plastic covered sofas that were never to be sat upon and having their movements restricted to a blanket in the middle of the floor, where they could be watched thoroughly.

I, your courageous guide, remember her mostly from my nightmares. In these barely fictitious visions, she could be found leaping from the shrubbery to ensnare me with gangly, decrepit bones or chasing me through dark, labyrinthine basements that never led to freedom. We are certain she had many wonderful traits but it was around the time of his marriage that Allen Ralph discontinued his love of photography and so we have very few pictures of the early life of their two children; George(Budsy) and our beloved Thomas Allen. Now, let us journey back and trace another groove in the pathway of time.

At the time Thomas Burry and Christina Sheirlaw were married in Scotland, Alexander S. Blackford was a blacksmith outside Bound Brook, New Jersey. His ancestors had been on New Jersey soil since before 1700 and his great grandfather served as a private in the New Jersey militia alongside two brothers during the Revolutionary War.

During the Civil War, Alexander the blacksmith served his country in the 3rd Regiment of New Jersey Volunteer Cavalry, Company E, within the Army of the Potomac. After Union General Sheridan had successfully carried out the Shenandoah Campaign in 1864, the ensnared Confederate General Jubal Early continued to sporadically harass Union troops and on November 22, 1864 on Mount Jackson, Alexander Blackford went missing and was accounted as dead.

His wife; Mary Eliza (Richardson) was left to care for their six children, including the second youngest, Clarkson Giles Blackford. Clarkson worked for the Central Railroad of New Jersey in Hampton, New Jersey, where he met and married Anna Jane Rodenbaugh in 1881. In 1887, their third child, Emery Cleveland Blackford, was born and two years later they moved to Somerville.

In 1900, the same year that George Burry Jr. was born, Clarkson Giles passed away and Emery, at 13, was forced by the needs of his family, to find employment. Emery, from all we can read about him and all we hear from those who knew him, seemed to be the type of individual who found success readily at hand and had a sort of addiction to being involved. He worked in publishing, real estate, insurance, and as a reporter for the Courier News throughout his life, while holding positions in a plethora of societies and groups including the Somerville Fire Department, the YMCA and the Fraternal Order of Eagles. In 1913, while the young Emery was conquering all that came before him, a 6 year old Mary Cima was leaving Bologna, Italy on the S.S. La Lorraine, with her two older brothers to follow their parents to the land of obvious promise, New Jersey. Mary and Emery were married after her first marriage fell apart because of this unnamed husband's keen desire not to have children. Not long after they were married, the Great Depression drove Emery and his growing family to Stroudsburg, Pennsylvania, in hopes of finding work. It was here that on November 12, 1935, their third daughter, Anna Jane Blackford, was born. And here for now, we leave off the tale of family, love, and chocolate. Allen and Anna Jane have entered the scene of history. Uncle George has founded Burry Cookies and acquired Helen Elliotts but he’s in desperate need of help managing his booming businesses. Who would ever want to leave the frozen North to live in the seasonally dynamic New Jersey and perhaps meet the love of their life? 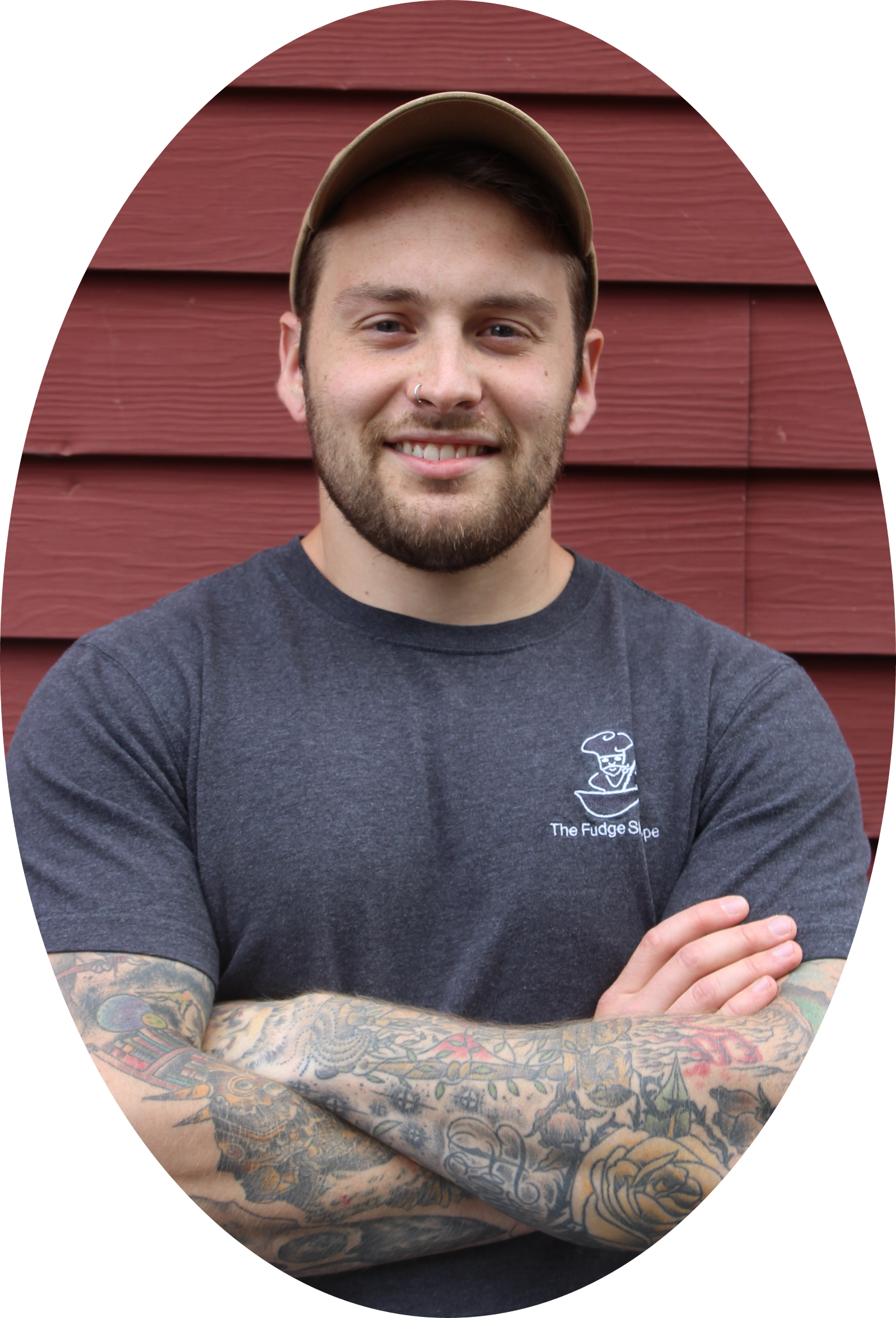 Production and Marketing Manager at The Fudge Shoppe.

← Back to The Fudge Shoppe Blog